The singer performed I Would Die 4 U during a hit-packed, 12-minute set in Minneapolis – Prince’s home town.

Timberlake also ran into the crowd to dance and pose for photos, in an unfailingly energetic appearance.

And he tacitly acknowledged his last Super Bowl performance in 2004, which ended with Janet Jackson’s infamous “wardrobe malfunction”.

On that occasion, he ripped a panel off Jackson’s bodice, revealing her right breast as he sang the lyric “gonna have you naked by the end of this song”.

When he reached that line on Sunday night, Timberlake stopped the music and cut to another song.

The gesture is unlikely to have impressed Jackson’s fans – who still resent the fact that her career was derailed by the incident, while Timberlake emerged relatively unscathed.

Ahead of the show, the hashtag “Justice for Janet” trended on Twitter, in the hope Timberlake would invite her back – but Jackson shut down that speculation earlier on Sunday.

Instead, Timberlake’s show (broadcast on a five-second delay that was instigated after the 2004 Super Bowl) was largely controversy-free.

His most divisive move was probably the decision to wear a shirt featuring a photograph of two caribou, which looked less like a stage outfit than your computer’s desktop wallpaper.

Still, Timberlake’s whip-crack choreography was so impressive it took a couple of minutes for the true horror of his outfit to really sink in.

He started the show backstage, performing his current single, Filthy, before dancing down an elevated walkway to the centre of the stadium.

Zipping through 12 songs in as many minutes, the 37-year-old showed off his enviable back catalogue – from the pop-funk of SexyBack to the robo-ballad Cry Me A River, into which he dropped elements of Led Zeppelin’s Kashmir.

Suit and Tie was performed with a marching band, while Timberlake sat at a piano to play his Prince tribute.

“Minneapolis, Minnesota, this one’s for you,” he declared, singing a new arrangement of I Would Die 4 U over an archive recording of Prince’s vocals, as images of the late superstar were projected behind him.

As the song reached its climax, the area around the stadium was bathed in purple lights, forming the “love symbol” Prince adopted as his name in the 1990s.

However, rumours that Timberlake would introduce a hologram of the pop icon turned out to be false.

Prince’s estate confirmed on Twitter that there were “never any plans” for such a stunt – although, in a neat touch, Timberlake’s band included guitarist Mike Scott, a long-time player in Prince’s band.

Timberlake made full use of the US Bank Stadium throughout his high-octane show, darting from one end of the pitch to another with barely a pause for breath.

He ended the show in the bleachers, singing Can’t Stop The Feeling with a bewildered teenage fan.

“That would have been my worst nightmare,” noted BBC Super Bowl presenter Mark Chapman afterwards.

“There’s at least 100 million people watching this in America alone and you’re meant to dance with Justin Timberlake on television!”

But it ended well – with Timberlake posing for a selfie with the youngster, instantly making him a star.

It was one of the few human moments in an expertly polished performance.

But the show lacked any of the spectacle we’ve come to expect from the Super Bowl – whether it’s Lady Gaga jumping off the ceiling of Houston’s NRG stadium or Katy Perry’s infamous “left shark” three years ago.

Timberlake has done better himself – his ebullient, career-spanning medley at the 2013 MTV Awards was a masterclass in stagecraft and charisma.

Maybe inviting Jackson back to make amends would have added some much-needed frisson, after all? 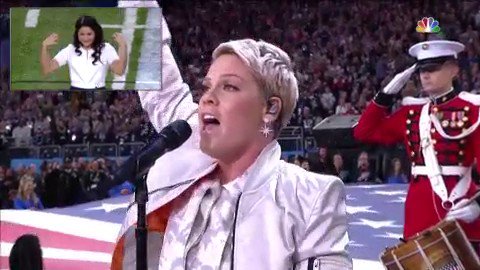 Earlier on Sunday, pop singer Pink – who’s a diehard fan of Super Bowl winnersthe Philadelphia Eagles – got the Super Bowl party started with a heartfelt rendition of the US National Anthem.

Despite battling flu, the singer’s voice was clear and powerful, with only a slight crack towards the end of her performance.

Cameras captured her removing a throat lozenge (which many first thought was gum) from her mouth, seconds before singing the opening line. The moment quickly became shared on social media. 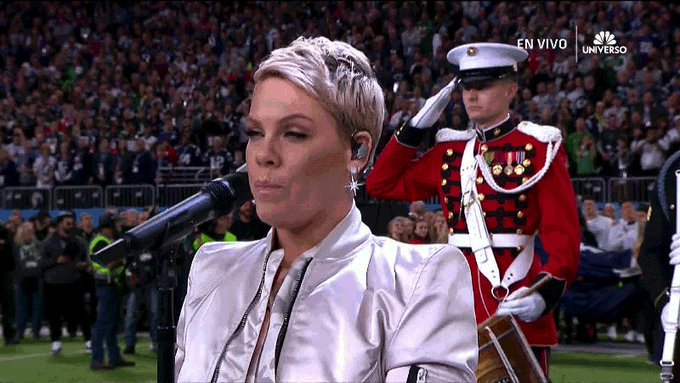 Before the show, Pink wrote on Instagram: “I’ve been waiting to sing this song since 1991 when I saw my idol, Whitney Houston, own this song.

“And here we are. I’ve arrived at another one of my dreams which is slowly becoming a sort of nightmare.”

She said she had caught the flu from her two children Willow Sage and Jameson, calling them “two small petri dish kids who literally cough into my mouth”.

Notably, none of the players at the US Bank Stadium kneeled or sat during the anthem.

Entertainment No Comments » Print this News

« Confirmed: No Integrity in Bility (Previous News)
(Next News) Disenchantment Brewing in Grand Coalition for Democratic Change Over Appointments in Government »

DenG was named Artist of the Year at the 2018 Tunes Liberia Awards. The eventRead More

By In-house Nigeria On 24 February, music lovers will have an opportunity to see Liberian actsRead More